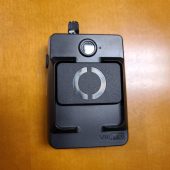 Wearable cameras allow for filming of interaction between officers and members of the University community.  The cameras are smaller than many cell phones, but they provide excellent audio and video evidence.

Which officers of the Department are issued body-worn cameras?

All Security Officers and Police Officers are issued Vie-Vu Cameras as part of their standard issued equipment.

What are the benefits of utilizing a body-worn camera system?

Research has indicated that body-worn camera systems increase transparency, can expedite resolution of complaints, and provide opportunities for police training.

When are the cameras activated?

Cameras can be activated

What are the laws concerning the utilization of body-cameras?

There are no laws in North Carolina that prohibit the use of body-worn cameras by law enforcement agencies.

What happens to the recordings?

The recordings are considered a part of the case file. The recordings are maintained on a server for a minimum of 90 days. At the end of the 90-day period, the recordings can be deleted from the server system. Recordings for cases involving criminal charges, an internal affairs investigation or a complaint normally will be held until the issues are resolved.

Are the recordings “public records”?

No. Under North Carolina law, the recordings are considered to be campus police agency records and not “public records.”

How are the recordings used?

The recordings are used primarily for:

If I am involved in an incident can I view the audio-video recording of the incident?

Permission to view recordings must be given by the Chief of Police or a designee.

If I am involved in an incident can I have a copy of the recording?

No, but the recording may be viewed upon request to and approval by the Chief of Police or a designee.

If I encounter an Officer, does he have to tell me that I am being recorded?

No, but an Officer may tell you that the encounter is being recorded as it may serve to deescalate a situation, reduce anxiety present in a situation or positively influence the attitudes of those people involved.