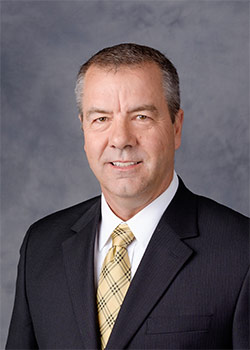 Executive Officer Bryan S. Blakley joined the Wake Forest University Police Department in September of 2015. He currently serves as the Patrol Commander, Records Management Supervisor and Property and Evidence Management Supervisor.  His responsibilities include the coordination and delivery of all state mandated and advanced training, background investigations, Winston-Salem Police Department collaboration and is the Athletic Event Security Liaison.   He is a 27 year veteran of the Winston-Salem Police Department, where he retired as Assistant Chief.

A lifelong resident of Winston-Salem, Executive Officer Blakley graduated from the Winston-Salem Police Department’s Basic Law Enforcement Training (BLET) in 1986. In 1990, he was promoted to the rank of Senior Police Officer, in 1999 to the rank of Sergeant, in 2004 to the rank of Lieutenant, in 2008 to the rank of Captain, and in 2013 to the rank of Assistant Chief. He earned a Bachelor of Science Degree in Criminal Justice from Appalachian State University and holds an Advanced Law Enforcement Certificate from the Criminal Justice Education Training and Standards Commission. He is a recent graduate of the 252nd Session of the FBI National Academy in Quantico, Virginia. He serves on several boards and committees in the community and is a member of Old Town Baptist Church.