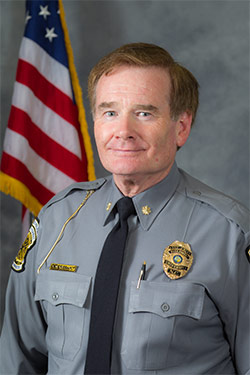 Major Overholt has been a member of the Wake Forest University Police Department for 24 years. He is responsible for compiling the annual Clery Report, obtaining and maintaining methods of emergency notification for the University and managing security at the University’s foreign and domestic satellite campuses. Major Overholt also serves as the University’s representative to the U.S. State Department’s Overseas Security Advisory Council, wrote Wake Forest University’s inaugural Overseas Crisis Plan and serves on the Overseas Crisis Management Team. He also serves as a member of the Sexual Misconduct Prevention, Policy and Resource Team and annually assists the U.S. Department of Justice, Office of Violence Against Women to review grant applications for federal funding.

Major Overholt has a Bachelor’s Degree in Criminal Justice and a Master’s Degree in Public Administration. Before arriving at Wake Forest, he was the Planning Director for the North Carolina Governor’s Crime Commission, and served as a Captain with the Buncombe County Sheriff’s Office prior to that. He has also served in management and administrative positions with the Colorado Bureau of Investigation and the Ohio Bureau of Criminal Investigation, and has an Advanced Certification from the Criminal Justice Education Training and Standards Commission. Major Overholt has served on the Board of the College and University Section of the International Association of Chiefs of Police (IACP) and is a lifetime member of IACP. Major Overholt’s knowledge of grant writing and program administration has been the critical factor in obtaining over five hundred thousand dollars of grant funding for Wake Forest University, including resources for Computer Aided Dispatch and Records Management, a Campus Violence Against Women Prevention Grant—the first one awarded in North Carolina—and a Community Policing Grant which provided additional officers to the University Police Department.

Like most campuses, the WFU Police Department is responsible for coordinating the campus Clery Report and in 2010, Wake Forest was audited by the Department of Education and, in large part due to Major Overholt’s efforts, found to be in compliance with the Clery Act. Major Overholt is one of a select group of professionals who have been designated as Certified Clery Compliance Officers by the National Association of Clery Compliance Officers and Professionals.  He received the Law Enforcement Commendation Medal from the National Society of the Sons of the American Revolution