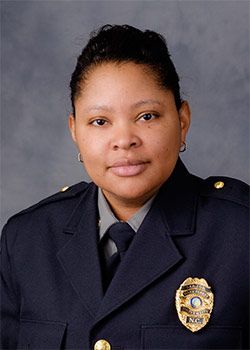 Major Derri G. Stormer joined the Wake Forest University Police Department in January of 2016. Reporting to the Chief of Police, the Major is responsible for supervising, reviewing, planning, and directing activities of all personnel assigned to the Support Service Division. The Major is responsible for initiating community partnerships and student collaborations; serving as a Public Information Officer; conducting crime analysis to implement intelligence led policing and crime resistance strategies; and actively recruits, trains, and retrains a diverse work force. In addition, the Major provides leadership in the development and implementation of comprehensive goals and objectives to ensure a community policing philosophy is measured and results are achieved; oversees all investigations including criminal, Title IX support, bias incidents, citizen complaints, personnel conduct, and delivery of services; and organizes and directs personnel and equipment during major events and emergencies.  She has over 15 years of progressive campus law enforcement experience.

While born and raised in Bertie County, NC Major Stormer spent most of her adult life in Greenville, NC located in Pitt County.  Major Stormer graduated from Pitt Community College Basic Law Enforcement Training (BLET) in 2001 where she was already hired as a police officer with the Winterville Police Department.  She would later move on to East Carolina University and remained there until joining the Wake Forest Police Department.  During that time at ECU, Major Stormer served in the Investigations, Crime Prevention, and Patrol Units.  She was a Senior Patrol Officer, Sergeant, and Commander during her tenure.  Major Stormer earned her Bachelor of Arts degree from the University of North Carolina at Wilmington in 2001 and a Masters of Arts degree in Adult Education with a graduate certification in Community College Instruction from East Carolina University and a Masters of Justice Administration from Methodist University in 2016.  She attended the Administrator Officer Management Program (AOMP) at NC State University and holds an Advanced Certification from the Criminal Justice Education Training and Standards Commission.  Major Stormer was awarded the 40 Under 40 Leadership Award from the International Chiefs of Police Association, which recognizes 40 law enforcement professionals under the age of 40 from around the world who demonstrate leadership and exemplify commitment to their profession.  Each winner was chosen for his or her demonstration of strong values and commitment to the law enforcement field.   With all the schooling and accomplishments, Major Stormer’s love is for her family most.  She has been married over 10 years and has three beautiful daughters Derrian, Isabella, and Adriana.